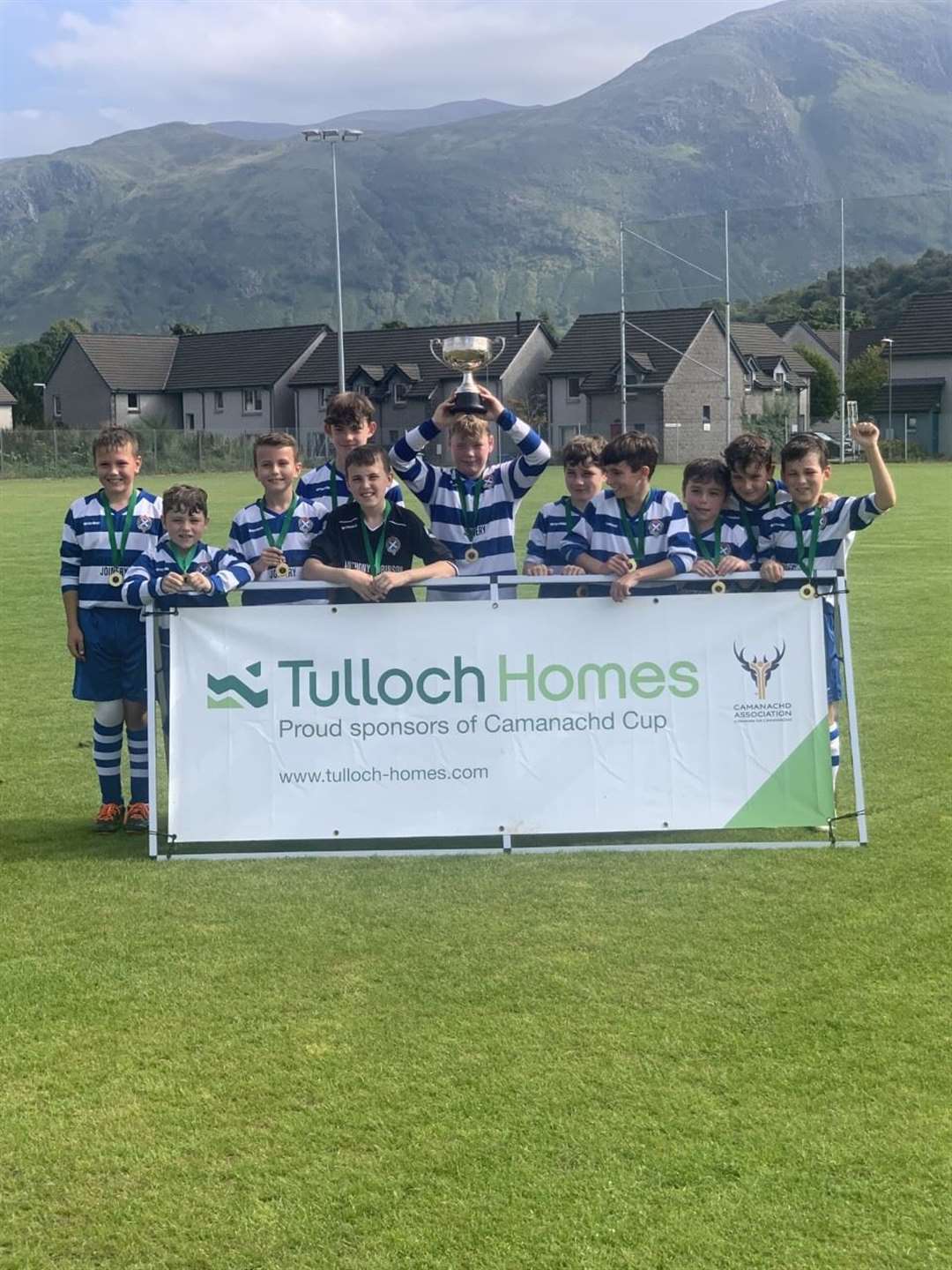 The youngsters have added the Camanachd Association Cup to the Tulloch Homes Primary Cup and MacKay Cup.

The Badenoch pupils beat Skye Primaries 9-0 in the final at Drumnadrochit on Tuesday.

Joe Coyle and James Coyle both scored four times and Jaiden McCormack got the other.

It has been a highly successful few days for the young team.

They beat the Glenurquhart/Balnain Primaries 17-0 to win the Tulloch Homes Primary Cup at An Aird in Fort William at the weekend.

Both schools qualified through their respective area leagues although some schools from other areas were unable to participate in the finals day due to Covid restrictions.

James Coyle set the pace on Saturday when he put ’More ahead in the opening minute and he made it 2-0 just 60 seconds later.

’More were relentless and even though they switched their team around in the second half, they continued to move the ball around to great effect, regularly adding to their score despite the best efforts of their opponents who never let their heads go down and defended tirelessly.

Newtonmore captain Joey Brannan, who scored twice early in the second half, lifted the trophy in front of his delighted teammates.

The Newtonmore U14s did well to reach the MacMaster Cup semi-final stage but lost out 9-0 to a bigger and stronger Fort William U14 side at an Aird.

The Fort go through to the MacMaster Cup Final where they will play either Skye Camanachd U14 or Kilmallie U14 ahead of the Tulloch Homes Camanachd Cup Final at Mossfield, Oban on Saturday.

n A total 27 teams comprising of 216 players representing clubs as far afield as Oban and Lovat gathered at the Dell to take part in the Kingussie primary school shinty sixes tournament on Sunday – the biggest gathering of its kind since 2019.

Inverness A, Caberfeidh, Lovat and Kingussie qualified from the group stages to reach the semi finals of the primary 7 and under competition. Inverness beat Caberfeidh whilst Lovat required extra-time to get past Kingussie.

Inverness made a strong start to the final before Lovat fought back but Inverness eventually ran out worthy winners. The capital’s’ Jay MaCrae was voted player of the tournament. Inverness A, Caberfeidh, Kincraig and Glengarry all progressed to the semi finals in the primary 5 and under tournament where Inverness (after extra-time) and Kincraig reached the final.

It took extra-time for Kincraig to overcame Inverness 4-2 in the final. Kincraig’s Joop Momertz was voted player of the tournament. The primary 3 and under contest was a closely fought affair with Kingussie and Kincraig safely navigating their league matches to reach the final.

It eventually took a tense penalty shoot-out, which went to ‘sudden death’, before Kincraig claimed victory.

Kingussie Camanachd spokesman Russell Jones said: “Many thanks to all 27 teams who travelled to the Dell at the weekend and to all the volunteers who worked so hard to make the day happen.

“It was a great day of shinty enjoyed by all.”