Covid-19 rates have fallen in most regions of England and across all age groups apart from the over-80s, in the latest sign that lockdown measures are having an effect.

The Public Health England data show that although London continues to have the highest rate of any region, its rate of new cases stood at 864.9 per 100,000 people in the seven days to January 10, down from 1,043.9 in the previous week.

There was a similar pattern in other areas, with the East Midlands, eastern England, north east England, south east England and Yorkshire & the Humber all recording a week-on-week fall.

The signs of progress came with Boris Johnson under pressure from Tory lockdown sceptics to set out how he will ease the restrictions on people’s liberties, with former minister Steve Baker suggesting “the Prime Minister’s leadership will be on the table” if there is not a change of course.

Despite the positive news about case rates, the PHE surveillance report noted that there were more people being admitted to hospitals and intensive care units.

The time lag between a fall in cases and an impact on the death toll means grim figures are likely to remain a factor for some time.

A new temporary mortuary that can hold up to 1,300 bodies has been built in London and the Government’s leading scientist Sir Patrick Vallance has warned that high death numbers will “carry on for some weeks”.

Professor Neil Ferguson, whose early modelling of Covid-19 made him a key player in the UK’s first lockdown, said: “We’re going to be well over 1,000 deaths a day, even measured by the date people die rather than the date deaths are reported, before numbers start coming down.”

But he said the current wave of the epidemic may be coming under control in some regions.

It comes as Health Secretary Matt Hancock said three million coronavirus vaccine doses have now been administered across the UK.

He tweeted that he was “delighted” with the news, adding: “We’re accelerating the Covid vaccine rollout across the UK.”

Some large high street pharmacies, including Boots and Superdrug, have begun the process of administering vaccines.

Six stores across England were in the first group to administer the jabs from Thursday as the Government aims to hit its target of vaccinating around 15 million of those most at-risk by mid-February. 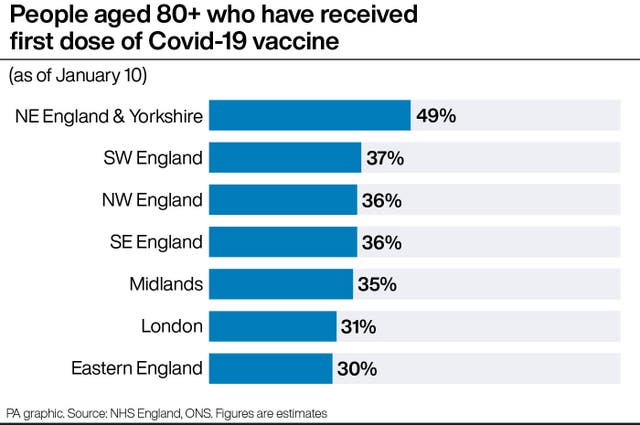 A regional breakdown of vaccination figures in England, up to January 10, showed a mixed performance.

A total of 447,329 doses were administered in the Midlands but London has delivered just 237,524 doses and the capital’s mayor Sadiq Khan said he was “hugely concerned”.

The NHS England figures indicate about half of people aged 80 and over in north east England and Yorkshire have received their first dose but just three-in-10 in eastern England and London.

– Travel to the UK from South America, Panama, Cape Verde and Portugal was banned from 4am on Friday in response to concerns about a new coronavirus variant in Brazil.

– Home Secretary Priti Patel said no new lockdown restrictions would be imposed “today or tomorrow” amid speculation that tougher measures may be required.

– Around one in five major hospital trusts in England had no spare adult critical care beds on January 10, NHS England figures show.

– Some 9,267 patients also waited between 30 and 60 minutes to be handed over from ambulance teams to A&E staff in the week to January 10.

– Data leaked to the Health Service Journal (HSJ) suggests one in 10 hospital nurses are now off work in the areas of England worst affected by coronavirus.

– Scotland’s vaccine deployment plan was taken offline after the UK Government raised concerns that it disclosed too much detail about supplies, with Nicola Sturgeon saying it was removed due to issues with “commercial confidentiality”.

The latest Public Health England surveillance report was published after Prof Ferguson said there was a “sign of plateauing” in the crisis in some parts of England and Wales.

But Prof Ferguson, who is director of the Medical Research Council’s Centre for Global Infectious Disease Analysis at Imperial College London, said social distancing measures could be required for months to come, partly because of the new variant in circulation.

“The new variant without doubt will make the relaxation of restrictions more difficult because it is substantially more transmissible,” he said.

“So it will be a gradual process to the autumn.”

Alarm about the continuation of lockdown measures – fuelled by a comment from deputy chief medical officer Jonathan Van-Tam suggesting restrictions could be needed until late spring – led Mr Baker to urge colleagues on the Covid Recovery Group to make their views known to ministers.

Urging them to contact Chief Whip Mark Spencer he said: “People are telling me they are losing faith in our Conservative Party leadership because they are not standing up for our values as a party.

“If we continue forward with a strategy that hammers freedom, hammers the private sector, hammers small business owners and hammers the poor, inevitably the Prime Minister’s leadership will be on the table: we strongly do not want that after all we have been through as a country.”

But Mr Baker later said on Twitter: “I am clear Boris is the only person to lead us out of these difficulties and I support him in that endeavour.”